Let’s talk root beer for a minute. I’ve never been a huge fan. Jim loves root beer and tries to keep a few bottles in the fridge at all time. I recently tried some of the root beer that Jim got at Starbucks and really liked the spice it had, so when he suggested a root beer glaze / sauce for some barbecued ribs I was totally on board. The root beer glaze is totally different from any barbecue sauce that we’ve made before. It’s a bit sweeter, with some spice notes. It also has a touch of sriracha, so there’s a bit of heat too.

Big racks of spare ribs are typically our go-to rib cut. However, we saw some beautiful St. Louis-style spareribs at the grocery store and decided to go with them this time. St. Louis-style ribs are just spareribs that have been trimmed a bit look more uniform. You don’t have as many of the small bones and cartilage as you see in traditional spareribs. These beauties cooked a little more quickly because of the size, which is always a good thing.

Jim cleaned up the ribs and removed the skin from the back. Then he coated them with his homemade rib rub and let them sit for about an hour before throwing them on the smoker. We use a mixture of oak (75%) and hickory (25%) for smoking, and try to keep the temp in the 250 to 300 degree range. Any lower than that and things get too smoky.  They cooked in about 3.5 hours. 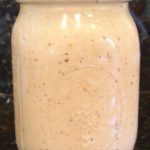